The project involved the partial renovation of a two-storey property which occupies the ground and basement floor of a residential building in Gràcia.

As two previous important refurbishments had radically altered the apartment’s character and the budget did not allow for a full interior renovation, it proved a small yet complex project which required architectural ingeniosity to fulfill the new users’ needs.

The owners, a couple with two children who no longer live with them, commissioned us to redesign the upper level as the main living space and transform the lower level into the children’s area.

On the ground floor, while we preserved the living room existing open plan layout, we reconfigured the master bedroom with a walk-in closet and an ensuite bathroom, incorporated a WC and made room for a combined storage and office. On the lower level the aim was to make a better use of space for the two children when they come to visit, with two bedrooms, a bathroom, a WC and a living room.

Upon entering, storage cabinets now line the hallway leading straight into the living area. The existing storage room now incorporates an office which opens out onto the hallway via a semi glass partition wall providing natural light to the space.

With the aim to increase the sense of space, we decided to remove the master bedroom’s existing ceiling. The original Catalan vaulted ceiling was uncovered and painted white, while the original stone wall was left exposed, offering a warmer ambience. The bedroom’s two entrance points increase the space’s fluidity.

Many of the existing elements- staircase, metal columns, beams, floors, walls – featured a dark color material palette which darkened the interior. The main idea was to create lighter spaces by using new materials in light tones.

One of the project’s main interventions was to recondition the existing electrical, heating and cooling system, while preserving parts of the existing installation. All exposed heating pipes which crossed the apartment’s walls and ceilings were hidden under the new flooring or inside the new partition walls and ceilings. The recessed spotlights were replaced by recessed downlights; all grey switches and plugs were replaced by white ones.

Much attention was given to resolve the humidity problems in the lower level due to the patio floor’s bad insulation. The existing deck floor was removed, a new insulation was installed as well as a new troweled concrete floor finish. 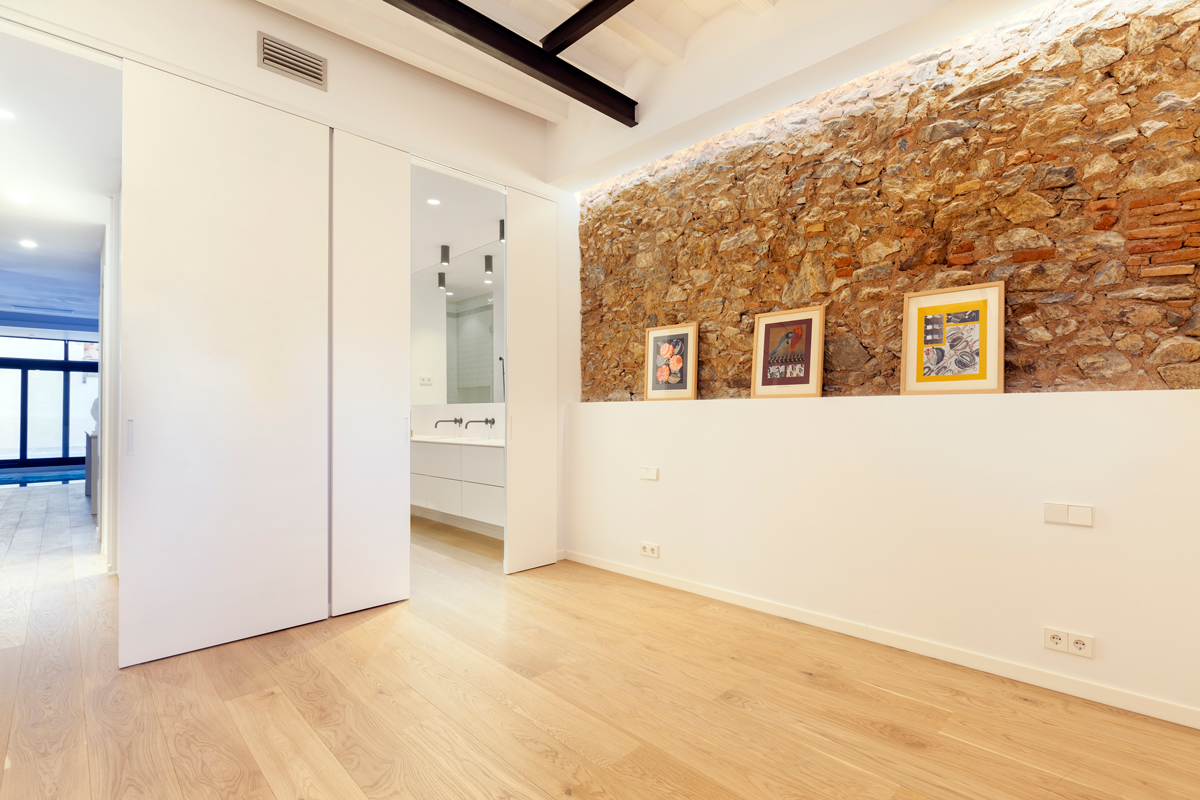 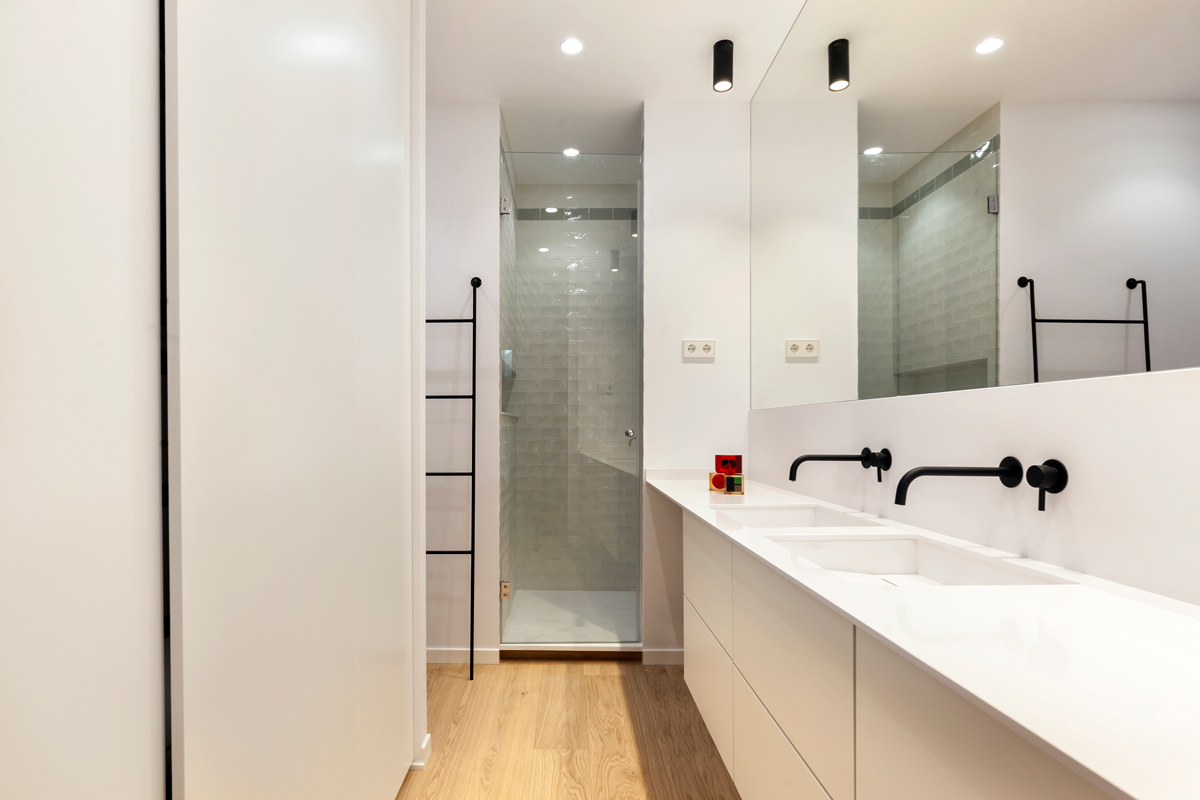 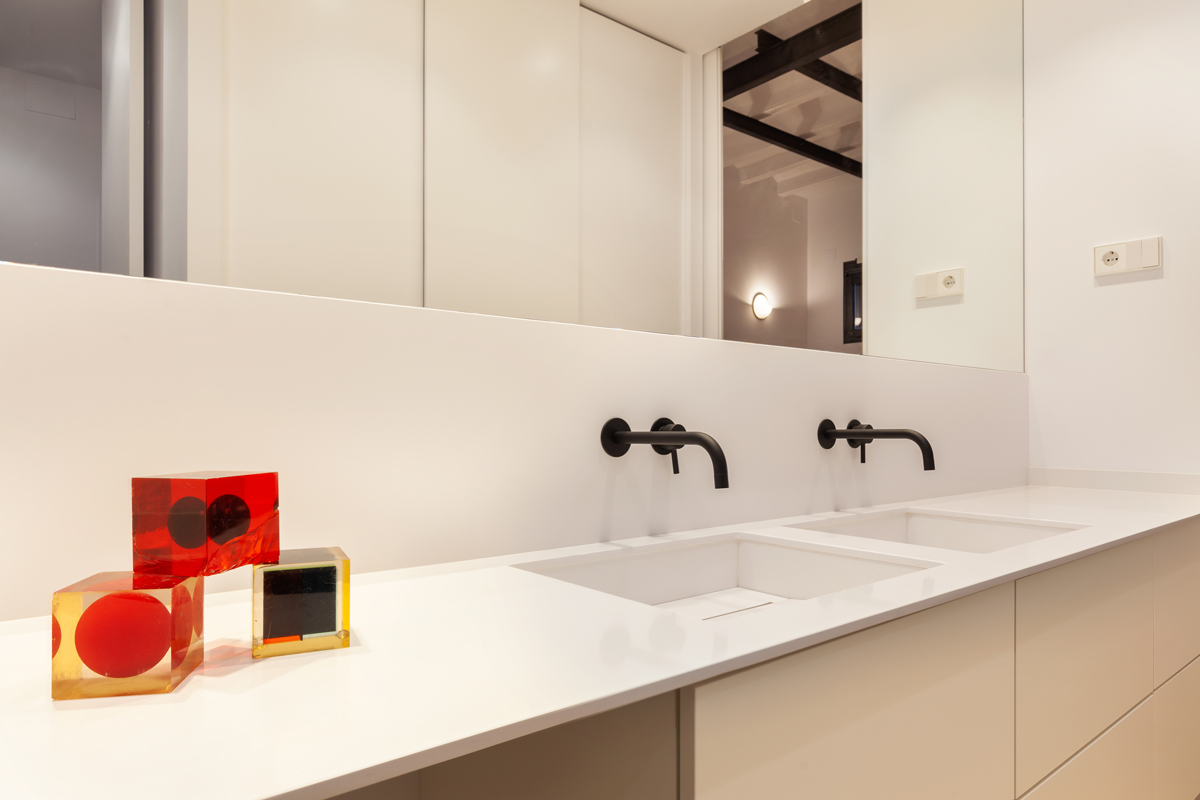 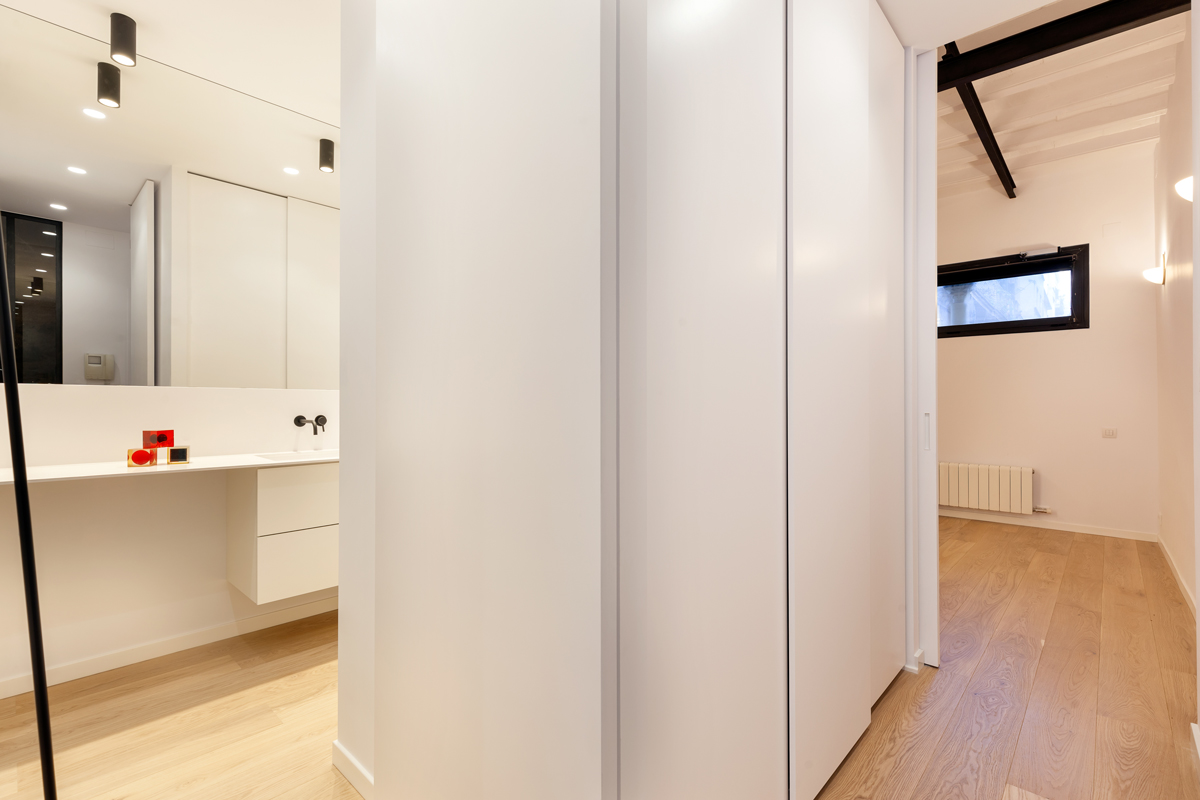 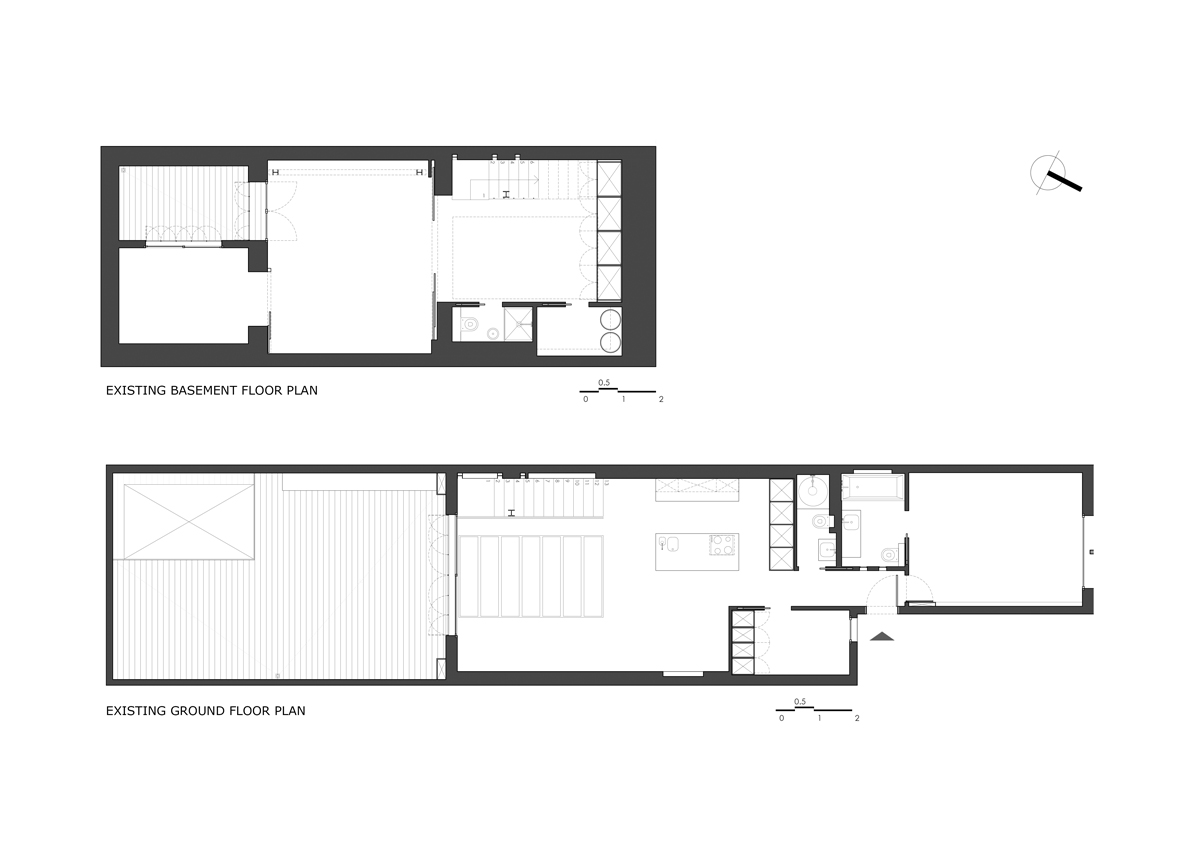 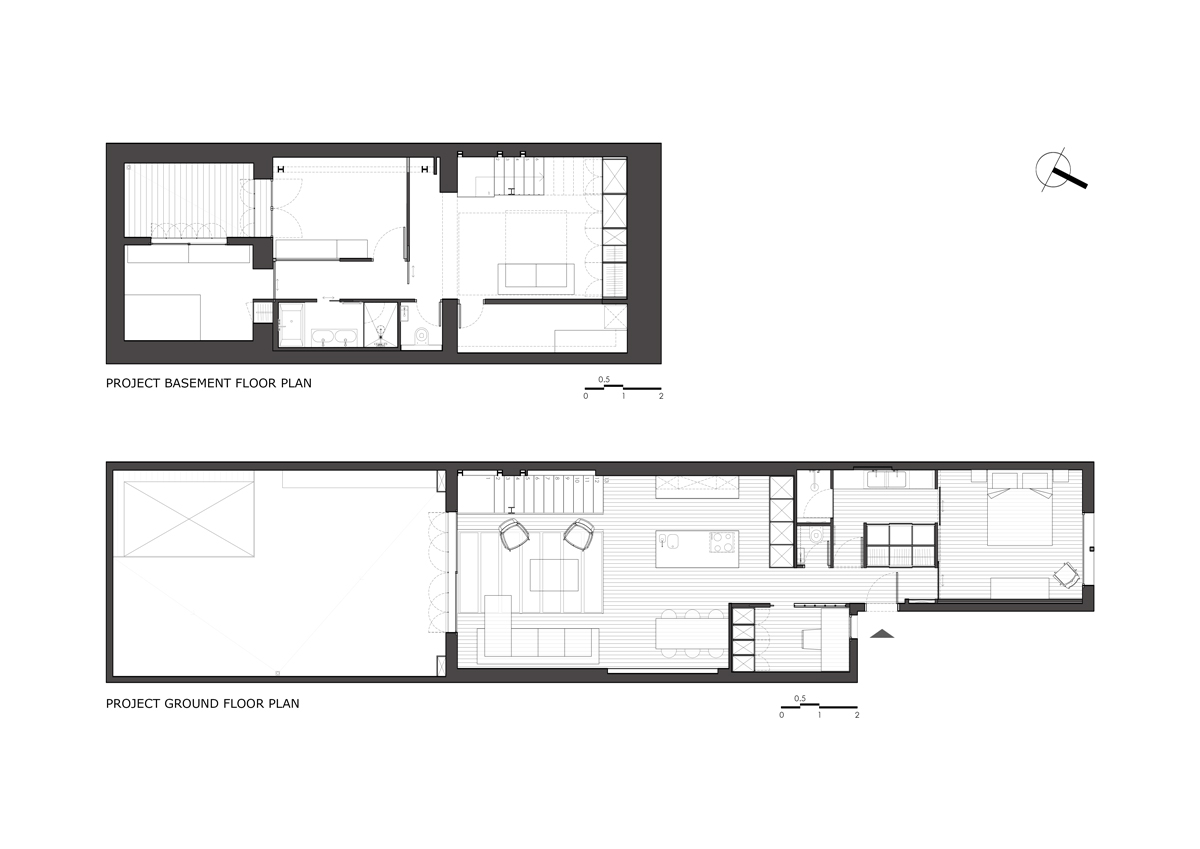